here’s a peek through the front door and out the back – the entry will same size doors at both sides to keep it open, breezy, and quick access around the long house. there is a deep, flat roof over the front door to give the stoop shelter in the rain and break up the roofline and alert people “here! this is the entry!”

walking up to the front door location, here’s the view through the foyer and out the back door. you can see there is a roof overhang on the wall to the right out the back door – we ended up cutting this back to the wall = no more overhang there. the challenge of working on a boomerang shaped house!

once inside the entry ‘foyer’ (such a formal word…) you turn left through a short passage and this is the view into the vaulted great room: the kitchen will be to the right, and a small den area to the left. the existing wood burning fireplace will now get a gas insert, a change from the original plan.

walking across the room, standing in between the living and dining areas and looking back; kitchen on left, entry foyer is through the passage to the right. the ceiling was previously flat with a roof truss system: the webs and lower chord were removed; the top chord remains but with new sistered rafters alongside.

the side walls are 9′ tall; the high point of the room is 16′ tall to the ridge beam. this is a view out through 16′ sliding doors of the living room side; there are matching doors on the dining room side as well.  END_OF_DOCUMENT_TOKEN_TO_BE_REPLACED

aptly named for its existing plan shape, this ranch sits at the edge of vineyards in northern Napa County.  This is the youngest house we’ve ever brought to the studs – built in 1988. Back then I was walking to the corner store with a friend, buying Cool Ranch Doritos and hearing Sweet Child O Mine croon from the radio as I passed by fields of the upstate NY type. (maybe this should be called Cool Ranch?!) 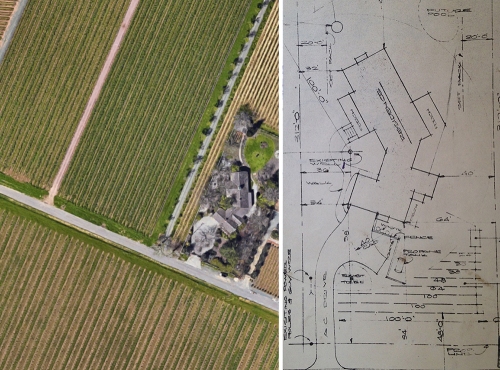 the house is well-built and was cared for, but it just needs a little jolt from us to kick up the dust and bring it to 2016. Axl is still trying to make it happen but that doesn’t mean this house has to.

one of the cool things about this ranch is that it came with original blueprints. hand-drawn plans and details! as you can imagine, one of the first things we thought of was to vault the ceilings and really appreciate / experience that gabled roof shape, from inside. that means removing a ton of trusses, 24″ o.c. … 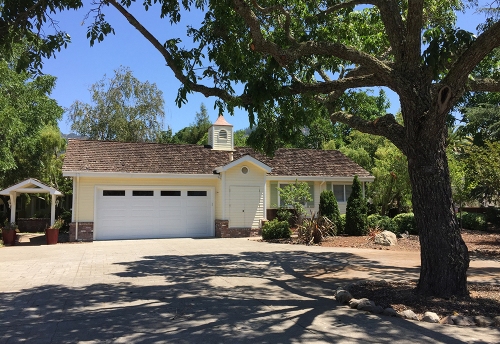 it’s a lovely location. the first thing you see from the road is the garage door, none of us like this but it has stay – only getting a makeover. below are a few more shots around the outside. where’s the front door?! 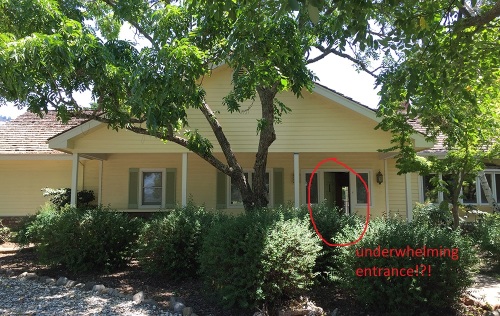 tons of butterceam yellow, eek – I really only like this on a cupcake. it’s really weird to me to see massive roofs leaning on spindly little posts. like I said, the house is ‘nice’ but isn’t living up to its potential in this location. 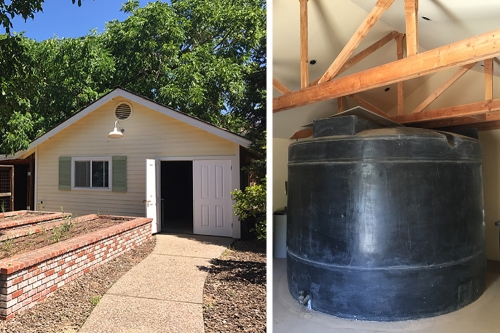 out in the back is the water tank building. around wine country you often see old water towers, with the tank at the top. this property has two wells.

we’re looking toward the rear yard, from where large doors will be located. 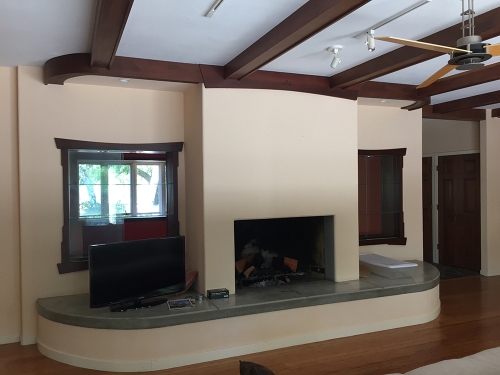 inside is just, blah. finishes aren’t amazing, flat ceilings throughout, gigantoid fireplace and concrete hearth. sidenote: there are some brass faucets that were hot in ’88 and despised until a few years ago. it’s all cyclical. here are a few proposed renderings, showing the new entry and vaulted ceilings with rafters. 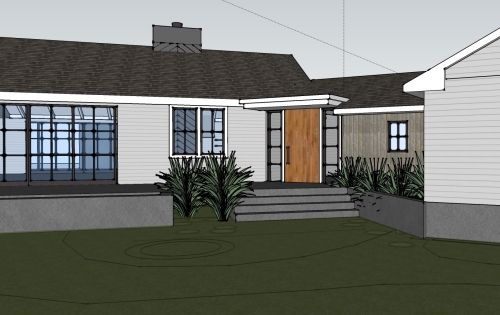 below are some more recent shots of what’s been going on:

from underwhelming entry to chopped off entry! the cupolas are staying, a client decision that I think is a good one. 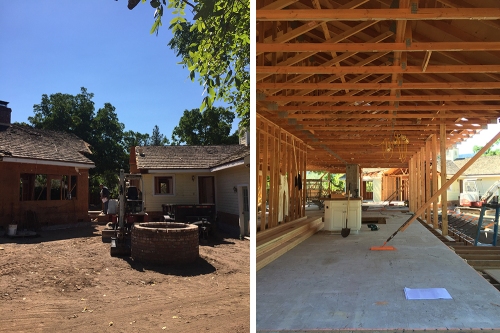 photo on the left above is a slice through the house, at the boomerang ‘elbow’ where the new main entrance will be. see one of the wells in the foreground. on the right, to the studs: the future dining / living area and soon to be removed trusses.

at the back / north end of the house will be the master bed & bathroom. the photo below is the stunning vineyard view directly across the street when leaving the driveway. this is why I’ve always said I feel like I can finally breathe when I get into the country – air, space, light, views, nature. stay tuned, more to come!

Here’s a familiar California scene, a sprawling ranch house with a pool inserted into the middle right outside the patio doors. (love the kidney-shape!) The house was originally a L-shape, with the garage on the right, and in the 1960s the center was infilled with a glassy “Likeler” addition. (like, but not, an Eichler).  Taking a cue from the board & batten siding, and the potential for vaulted ceilings, the proposed project will transform it from tired rancho to bright, modern with a farmhouse overtone. 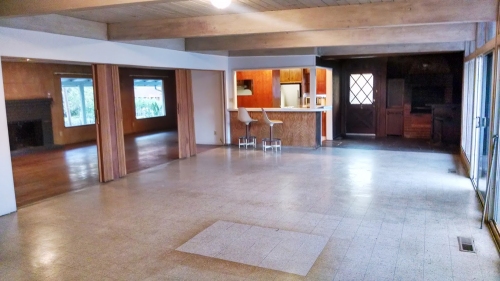 A view inside the infill addition above, with deep wood beams below a tongue & groove ceiling. The roof / ceiling is sloped just slightly that the doors at the exterior wall are limited in height.  Below, a stone-floor ‘old west’ bar and fireplace – perfect to order a flaming drink!  Accordian doors separated the rooms…

Below is a view at the rear of the old garage. It had been converted to living space, and we’re opening it up to create a family / play room with lots of windows and doors. We removed the low, rearmost portion that would barely allow for new doors. The entire roof had to be reframed since it will be vaulted in its new life. The bottom photo shows openings for (3) sets of french doors.

When I first visited, I appreciated the asymmetrical view of this roofline in front of the pool. It reminded me of another asymmetrical ‘old west’ house from my distant memory – Little House on the Prairie! 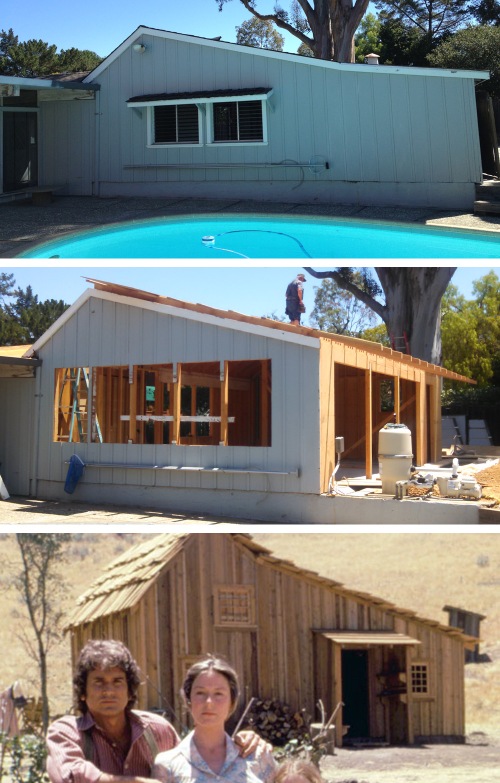 OK maybe a little bit of a stretch. In the middle photo above you can see the new bank of windows, and doors around the side. (too many for windows for a prairie winter…I’ll stop now) From the inside, below:

The owners decided on polishing the existing concrete floors that were buried below old carpet and flooring tiles, in this room and the main Likeler room. I love it. Other attached spaces (kitchen and dining area) will have stone or tile to match the concrete closely.  A closeup of the concrete below:

The view above is the beamed ceiling after it had been lifted, to create a flat plane. The Jenga-type blocks are temporary 🙂 until the new posts were inserted. The new doors will be (3) pairs of french doors that fit up in between the beams, with no upper transom windows. We considered a full-wall multi-panel slider or bi-fold, but those would require a steel beam header, below the wood beams, that would minimize the overall door height.  It was a challenge but we decided the tallest possible french door with 2×2 divisions would be appropriate throughout the house. 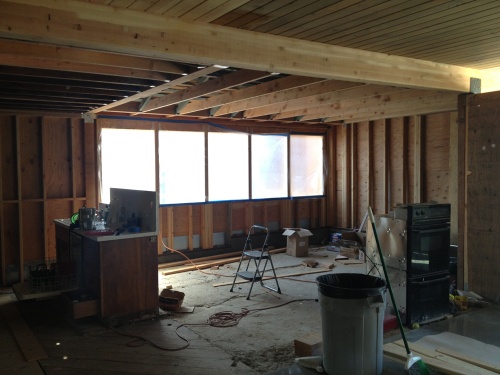 Around the corner from the tall french doors is the kitchen with window-wall breakfast nook, mimicking the one in the play room. This area seen from the outside, below: 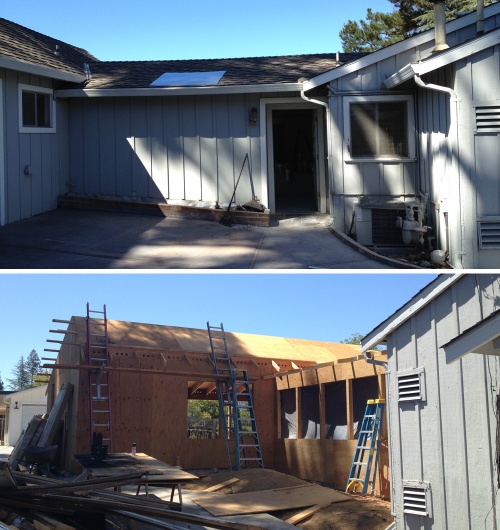